Join the exclusive list and follow along with us as we share a behind the scenes look at what a full Japanese trip experience can include. 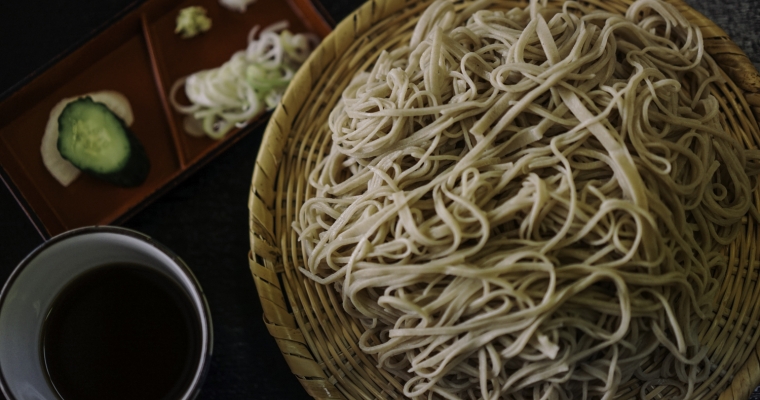 We've left our shoes at the entrance of a building you’d easily pass by if you didn’t know what was inside, and we're sitting at a low table on a cushion. The space is simple with white lanterns hanging overhead and wood accents. The view outside is from a storybook, and the tables line the windows so that you feel as though you’re actually outside.

We take in the layered mountains covered in a faint mist, and the colors of fall peeking through. We have a sense that it wouldn't be hard to live here, where mountain hot springs are plentiful, and peace is a thing that's somehow in the air.

The effortless grace of the environment almost makes it easy to forget what we've come to do - eat. But not just eat. As with most food in Japan, this meal will be a lesson in Japanese culture, and lifelong dedication to the perfection of a skill. The small soba restaurant is staffed by a husband and wife team, and is open only when there's not enough snow in the mountains to ski.

Taki San, and resident soba shokunin (master) left his restaurant in Tokyo to move to the mountains with his wife. They aimed to open a smaller, more low key soba spot, giving him the ability to ski as many days of the year as possible.

As though being a soba master wasn’t enough, he’s also masterfully knowledgeable about sake, and offers to share with us some of the best in his collection as we wait for our soba. 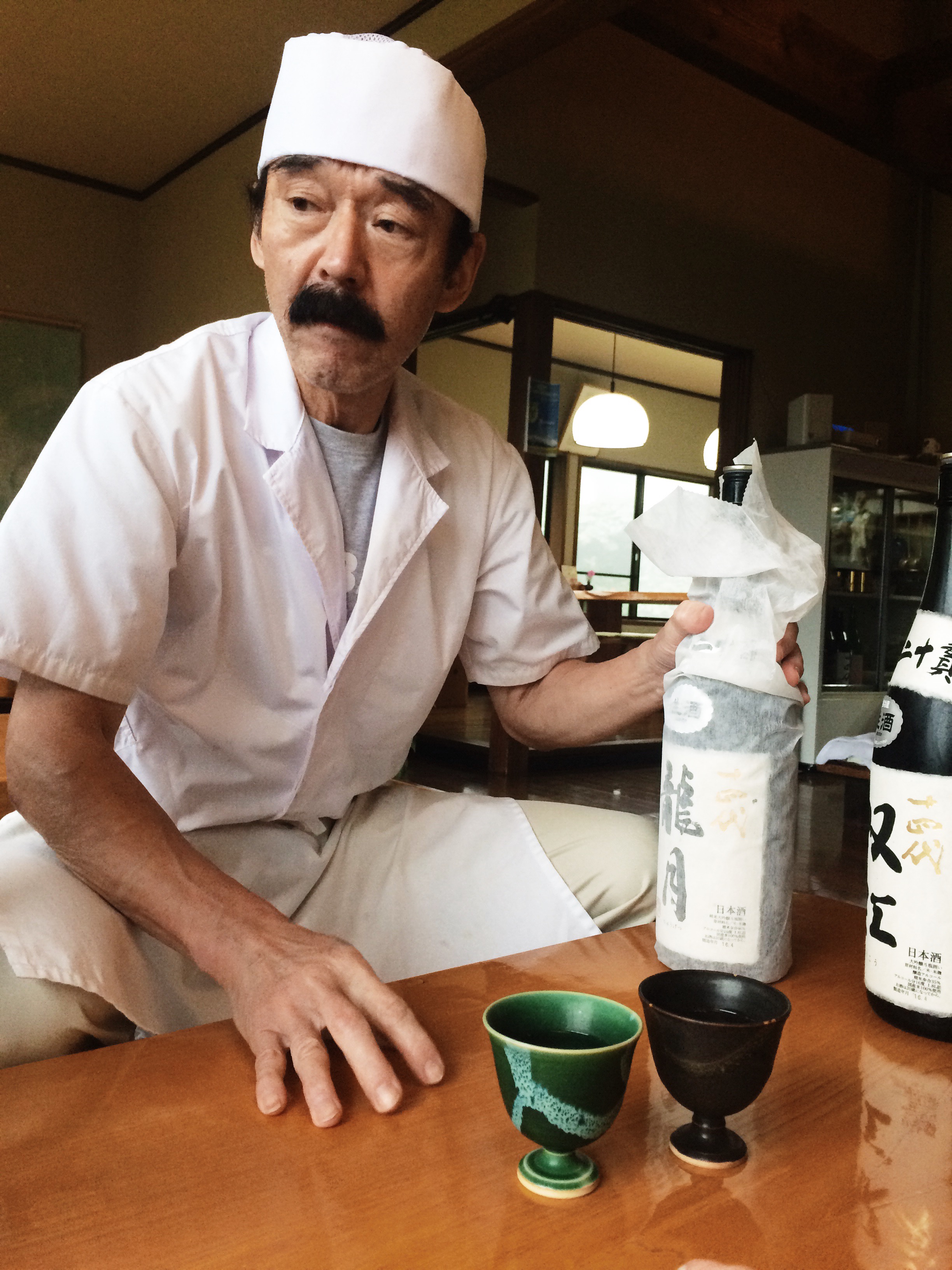 Unlike ramen noodles, which are made from wheat flour, soba is made from buckwheat flour. The highlands of Nagano are perfect for growing buckwheat, and it’s everywhere, making soba one of the must-eat foods in the region. The very best, or purest soba is 100% buckwheat.

Some chefs will combine wheat flour with the buckwheat because buckwheat is more difficult to work with as it's more brittle on its own. Taki San does not cut corners. While we marvel over the quality of our generous pours of junmai daiginjo sake, the soba making commences in the kitchen.

Having taking a few soba making classes, I have a little knowledge of how difficult the process truly is. It more closely resembles a scientific ritual than simply cranking out a tangle of noodles onto a plate. It’s a study in precision and attention to detail, all accomplished at a pace that would make your head spin.

First, the buckwheat is ground. There are a variety of ways to do this, but the best will grind it by hand until it has transformed into a soft powder. Even the first step in the process is one of strength and experience. I witnessed a friend of mine, a strong young man, struggle with the stone grinder as his 75 year old teacher moved the heavy stone with ease. I laughed at him, and then gave it a try myself with the same result. 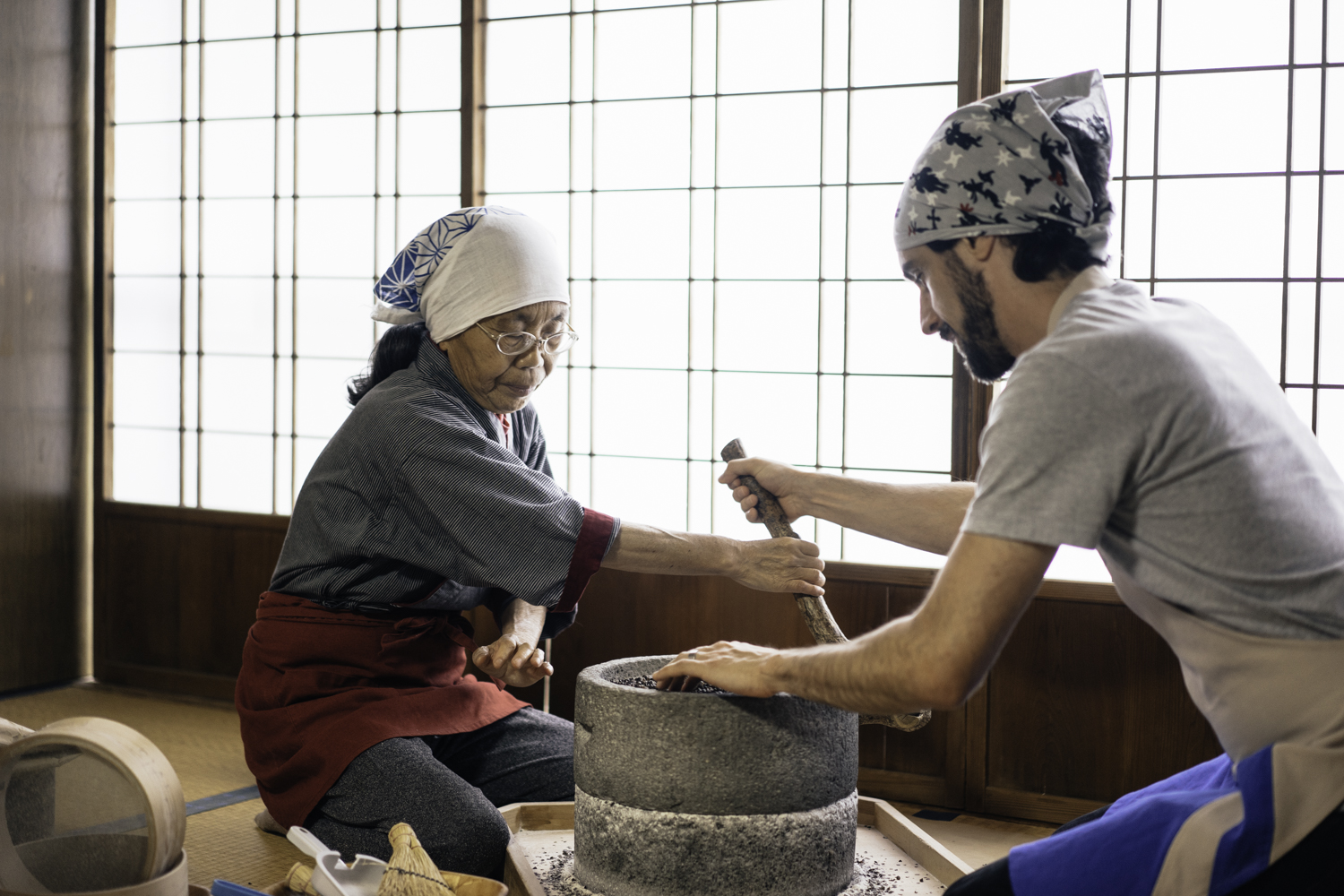 Next, water is slowly and methodically mixed into the flour, massaging and kneading until you have a smooth lump of dough. Novice tip: don’t stop massaging the dough until you’re instructed to or you’ll be scolded. 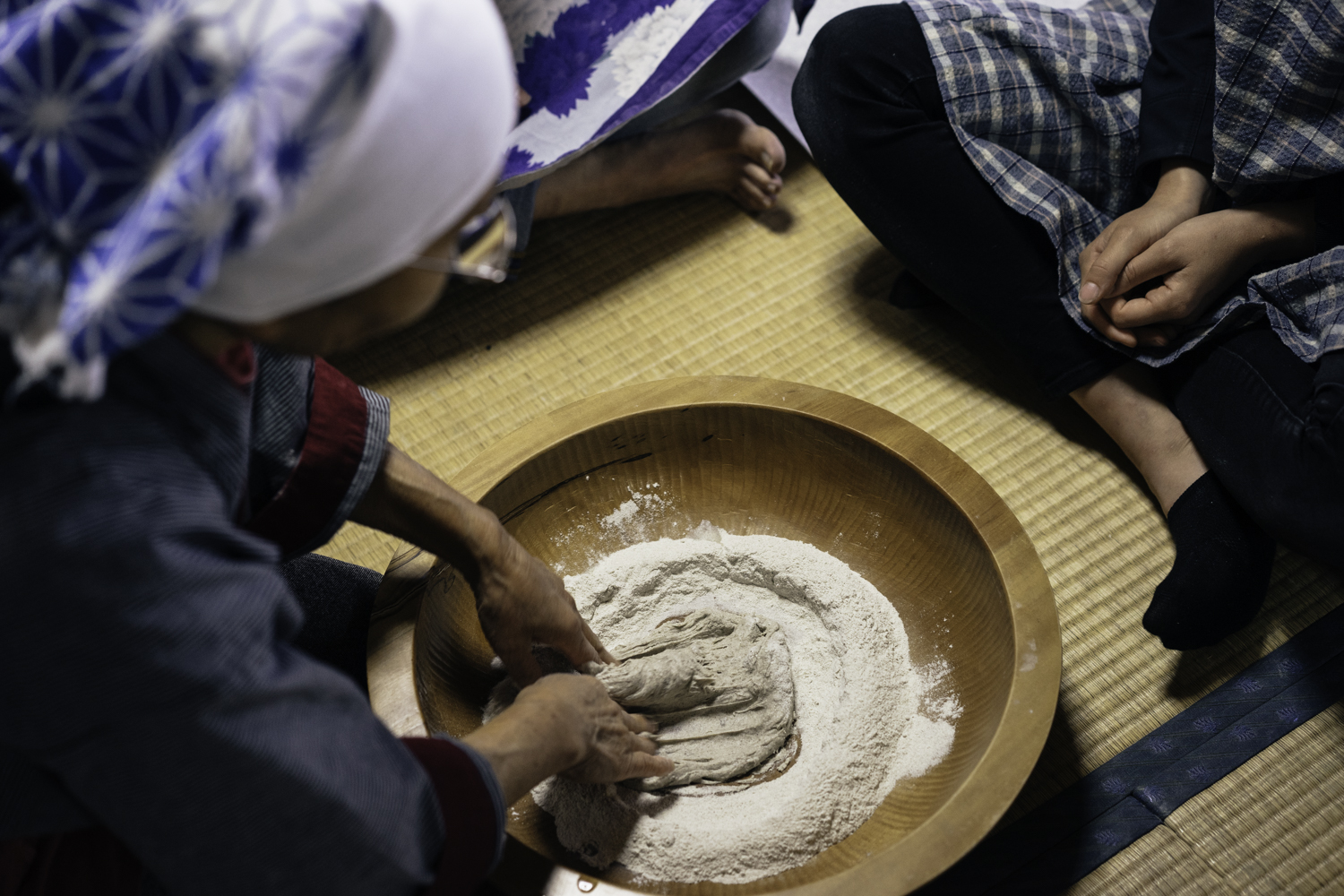 Then comes even more kneading in a specific circular motion as you coax the air out of the dough and move towards creating perfect consistency. 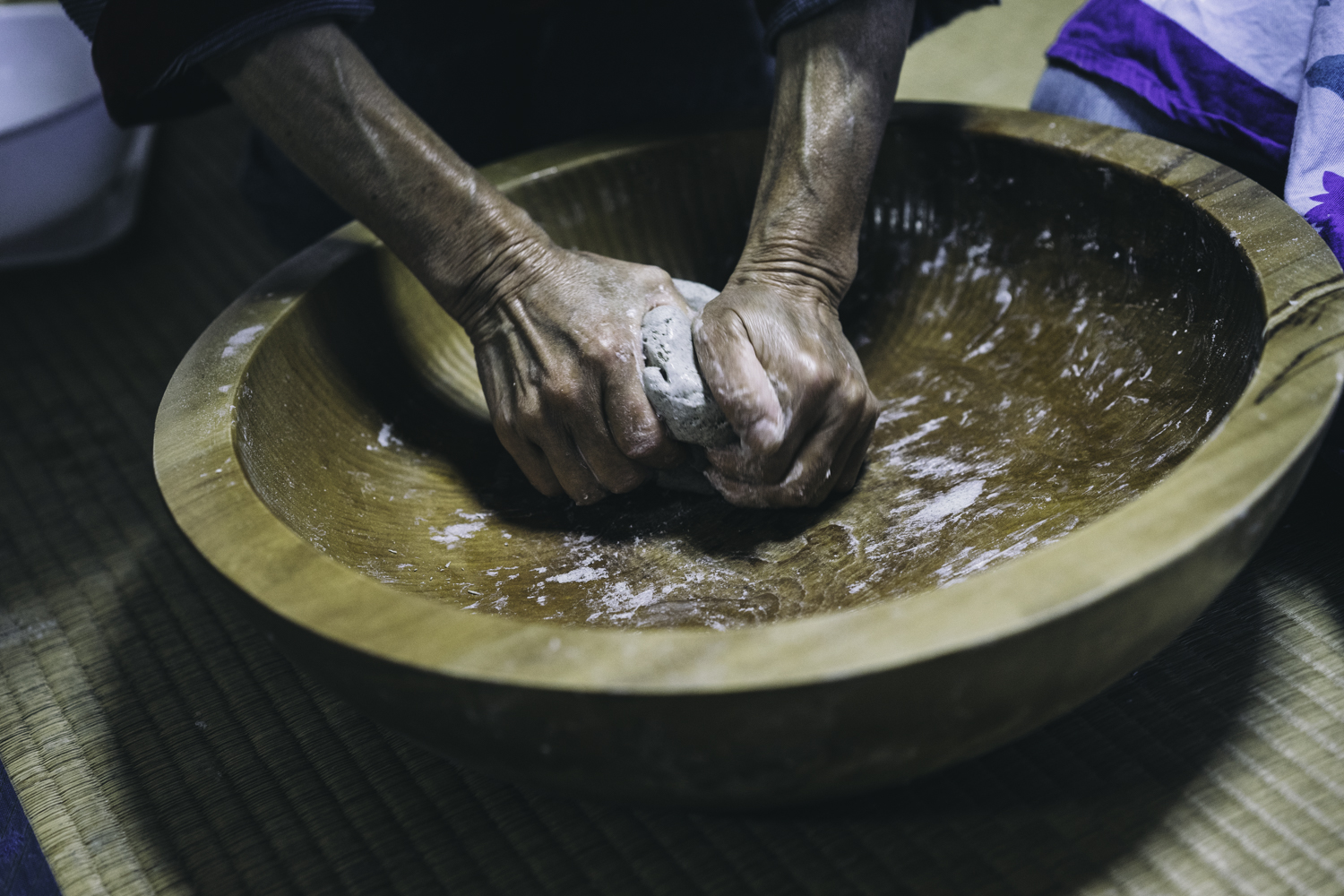 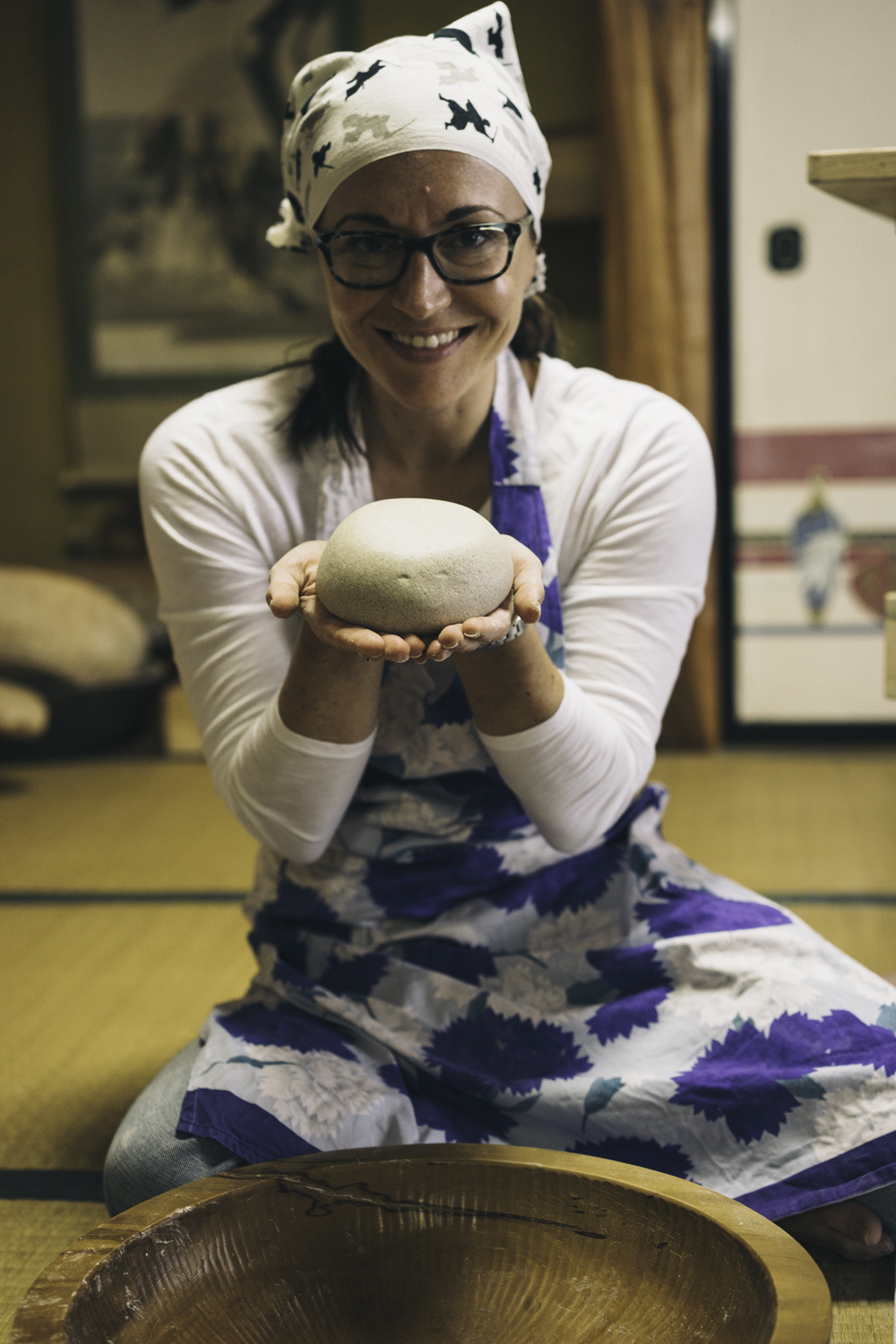 Once you have your dough, It needs to be perfectly flat before it can be cut into noodles. This is accomplished by placing the lump on a flat wooden surface and using your palm to flatten it until it resembles the beginning of a pizza crust. 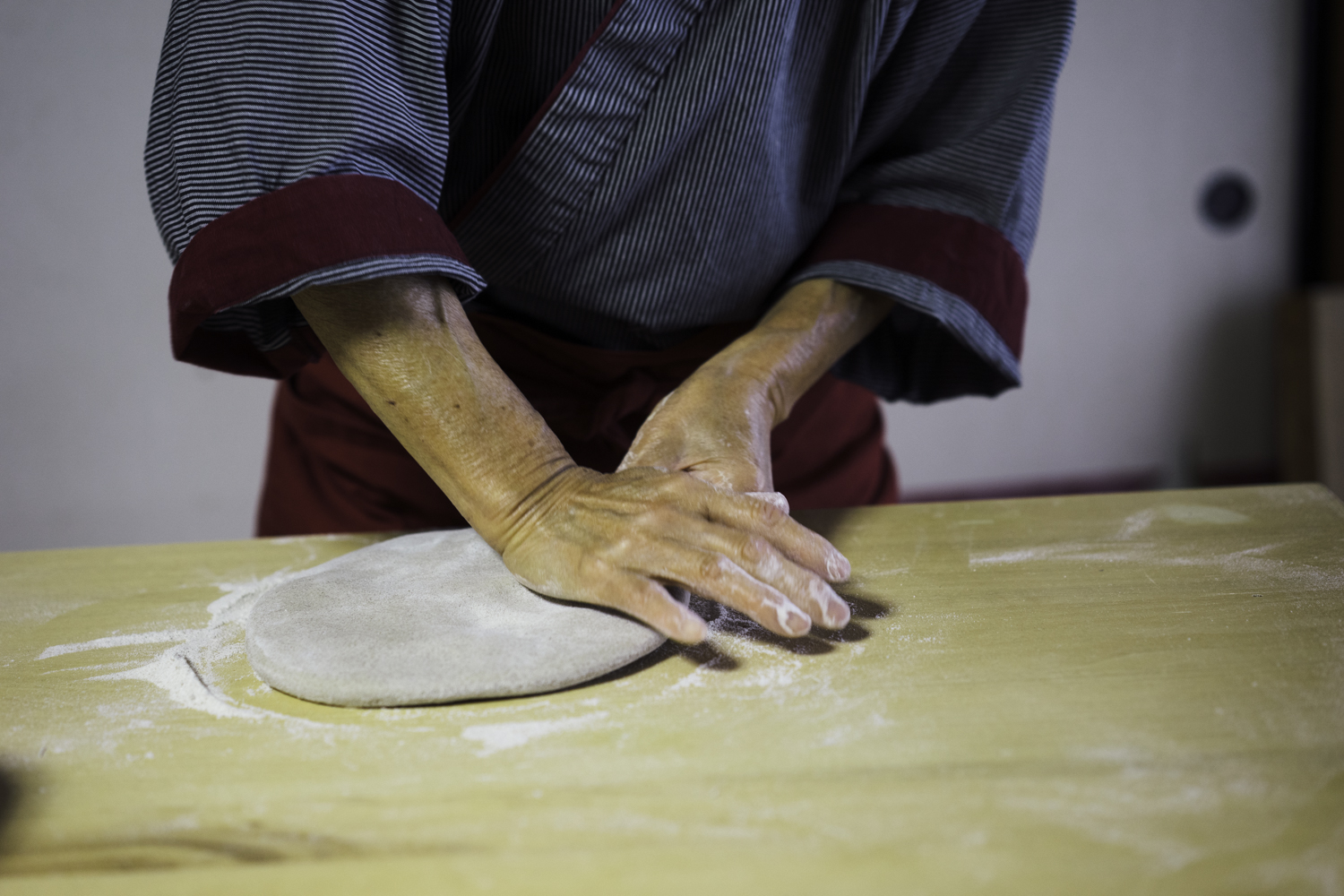 Then, you take a very long wooden stick and smooth it out wider and thinner, curling it around the stick and slapping it back down on the table with a confident whap at a consistent rhythm. It is important that the entire batch be equally thick or the noodles will be varying widths, and cook at different rates. 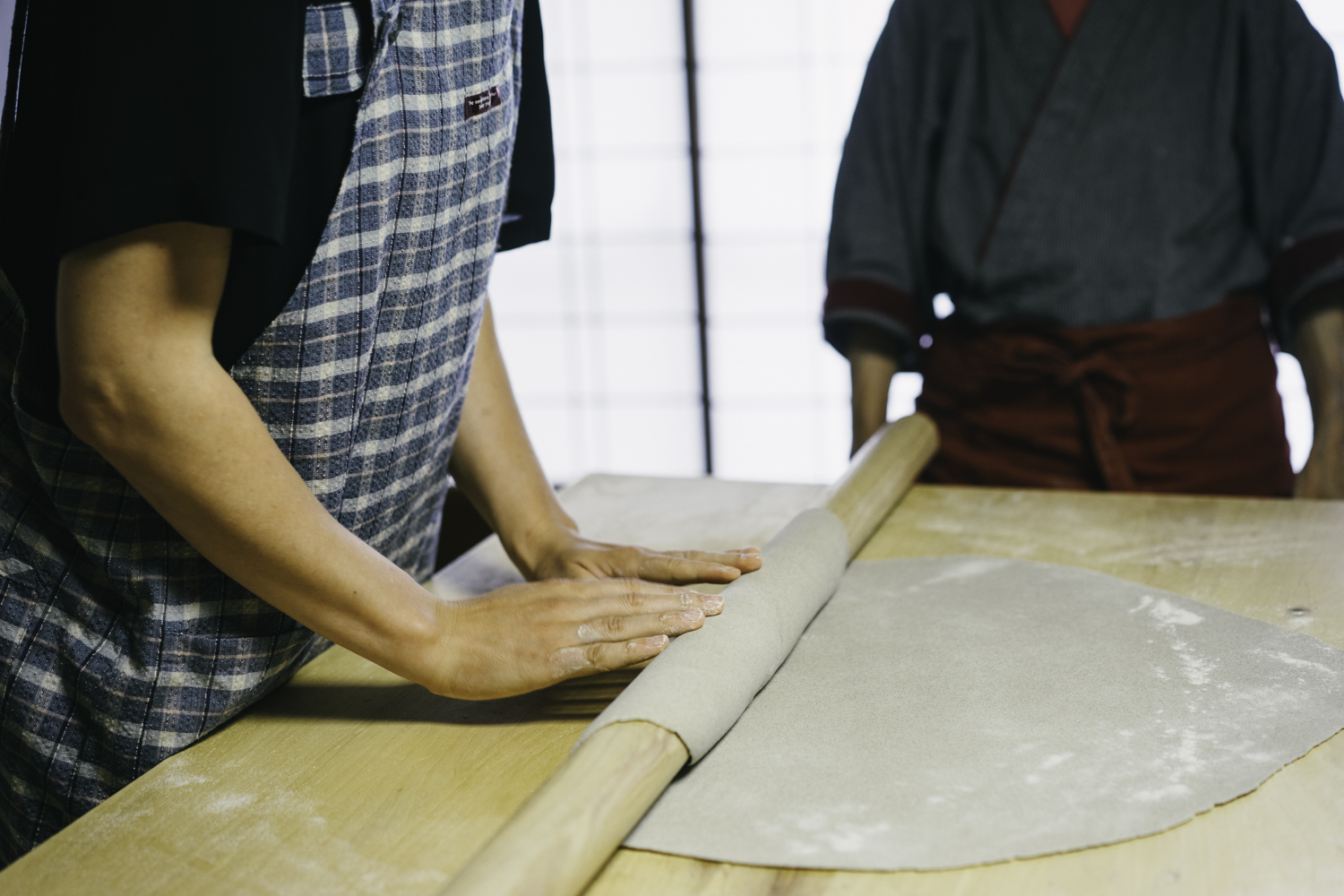 Once the dough is flat and round, it is folded somewhat like an accordion, and the cutting of the noodles begins. Soba shokunin will cut rapidly and each noodle will be exactly the same width as the next. 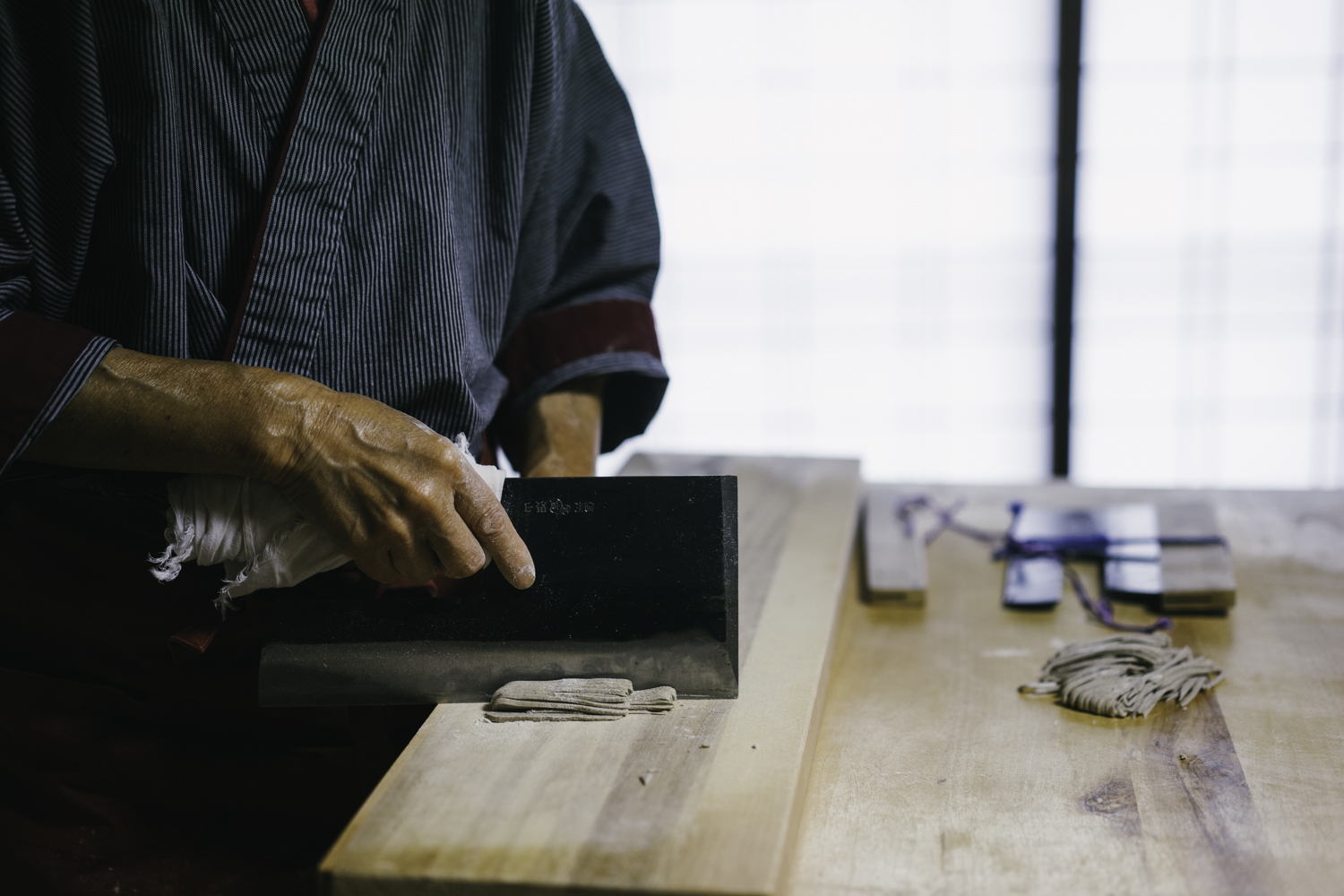 Newbies attempting this part of the process will take at least ten seconds to line up each cut and still end up with variances in size. When all of the dough has been cut, the soba is ready to be cooked. 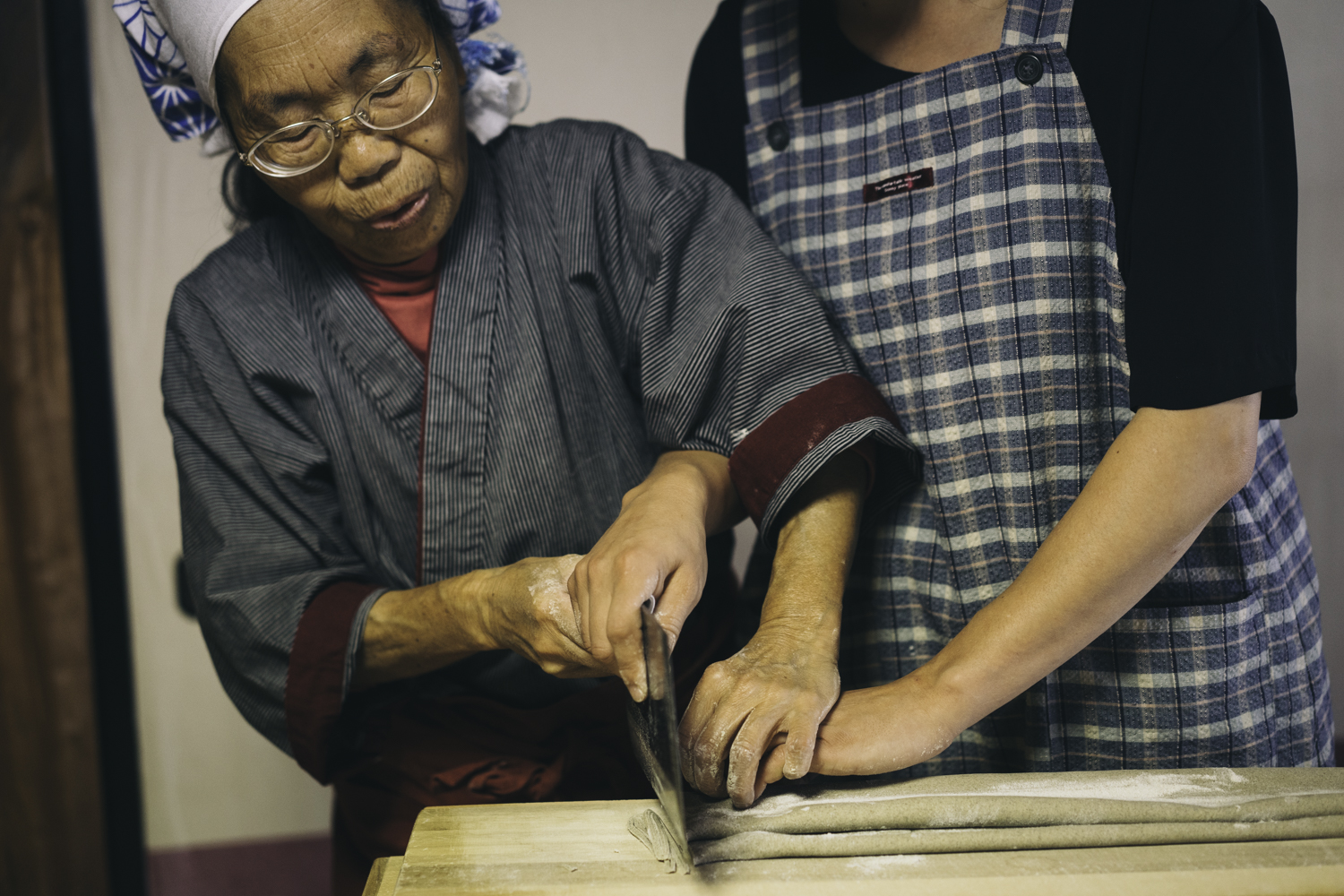 During our afternoon with Taki San there were five people in our party. We happily sipped our sake and chatted for about 20 minutes while the above process continued for each in the kitchen.

The soba was served on traditional bamboo (basket) accompanied by a soy based tsuyu (dipping sauce), green onions, and wasabi. The wasabi and green onions are meant to be added to the tsuyu based on preference. We were instructed to first taste the noodles without anything on them to fully appreciate their taste and texture. Then, the proper way to enjoy the rest of the soba is to dip only half of each bite into the tsuyu so as not to overwhelm the delicate flavor of the noodles with the more bold flavors of the tsuyu and wasabi.

It is a meal of nuance and also slurping. Slurping is encouraged - the oxygen enhances the flavor of the noodles at they enter your mouth.

During the process of cooking soba noodles, much of the buckwheat nutrients are left behind in the water. So, when every last noodle had been slurped down with relish, we were provided with a container of the sobayu (soba water), which we added to the remainder of our tsuyu to drink like a tea.

The meal was capped with a cup of coffee, and a chat with the humble shokunin about his winter plans to travel to Europe to chase the powder. Taki San and his wife kindly agreed to pose for a picture in front of their shop. We bowed and thanked them for an experience we wouldn't soon forget. 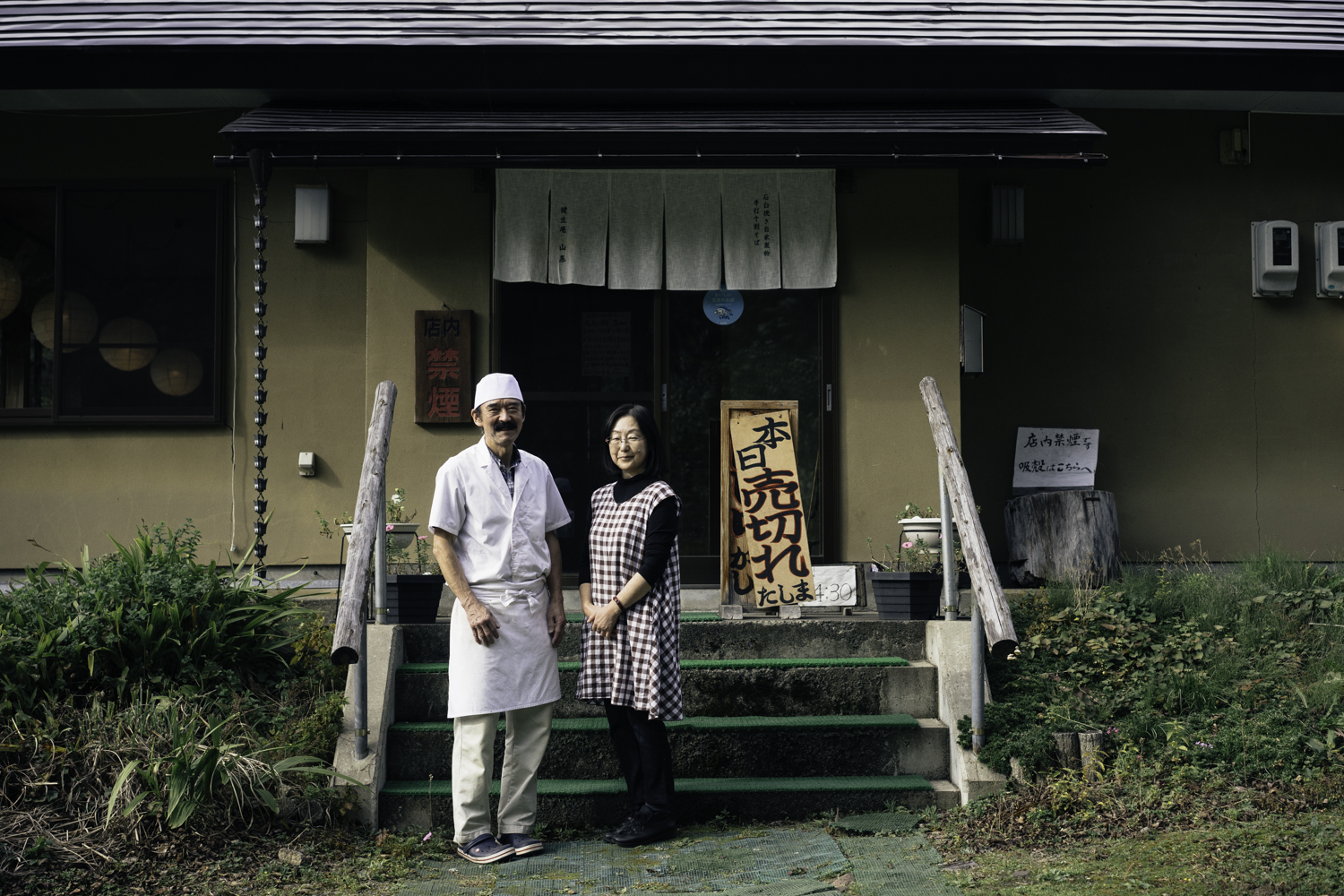 When you travel to Japan, don't pass up the opportunity to eat shokunin level soba, preferably in a shop tucked away in the mountains. While you may be tempted to stick to the familiar ramen joints, branch outside your noodle comfort zone and try a dish in a class of it's own.

Want to check out our trip offerings? Click here!

Back to All Blogs